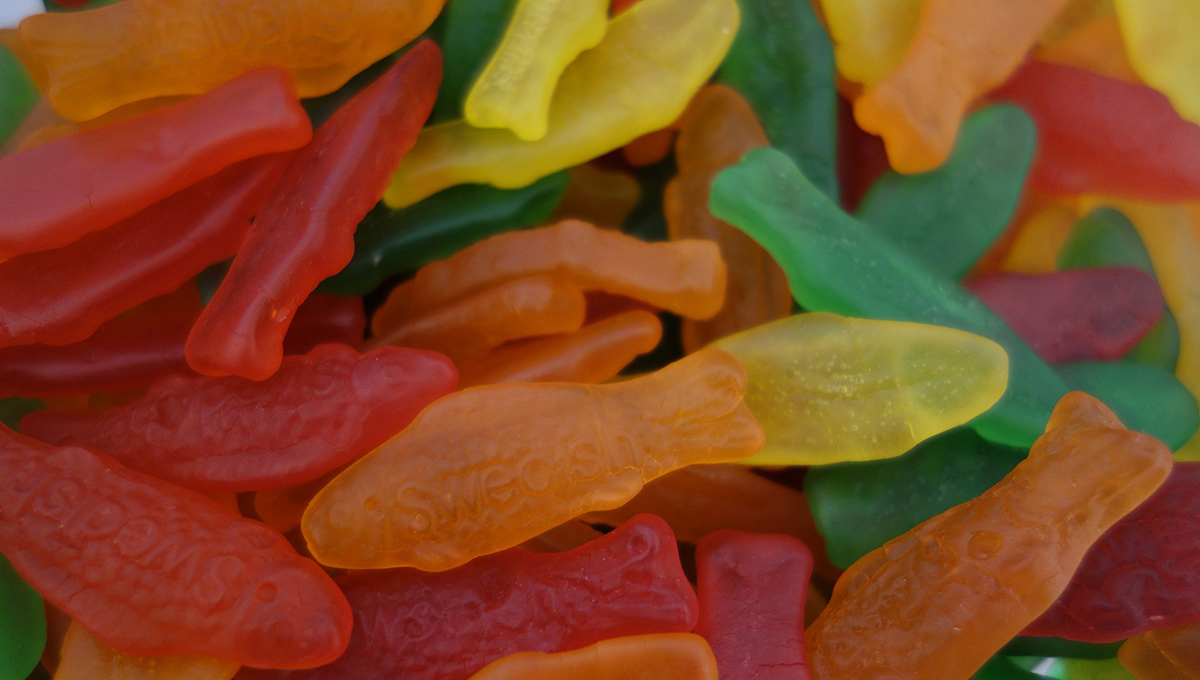 We’ve all heard of these famous sweets, but what do Swedish Fish taste like?

These soft and chewy pieces of fish-shaped candy have been know to taste like lingonberry, which is a European berry.

However, in America, the red flavour of Swedish Fish is usually referred to as just ‘berry flavour’ and the mystery behind the original flavour is still argued today!

This popular American candy has been around since the 1950s, is made by Swedish confectioners Cloetta under their brand, Malaco who also make Sour Patch Kids sweets and candy.

Do they sell Swedish Fish in the UK?

Yes, they do! Swedish Fish are sold in the UK and are becoming a very popular choice for wholesale retailers when buying stock.

Customers love them as they are fat-free and vegan friendly. The Kandy King stock this great range in Candy Peg Bags and Theatre box sweets.

How did Swedish Fish get their name?

Swedish Fish got their name from the fishing industry that was thriving at the time of their creation, as well as them obviously being Swedish!

This is also represented in the unmistakable fish shape of the candy itself, which for a gummi candy, is remarkably detailed.

This soft chewy candy in Sweden is actually called ‘Pastellfiskar’, which, when translated to English, literally means ‘pale-coloured fish’.

Swedish Fish taste like lingonberry, which is a berry that grows in Europe. However, no one really knows the actual flavour of these soft chewy candies as their unique flavour has never been official explained.

The brand itself makes light of this mystery by adding the catchphrase ‘Tastes like fruit, not fish. Try some if you want’. To the annoyance of many, the official flavour of Swedish Fish remains a mystery.

Swedish Fish Sweets are vegan friendly but it’s always worth checking the ingredients to be extra safe.

They don’t contain gelatin (which is derived from the collagen obtained from animals), so unlike most gummy sweets, they are vegan and 100% animal cruelty-free.

What flavour are Swedish Fish candy?

Swedish Fish candy comes in a variety of flavours, such as the original ‘Red’ flavour, Tropical and Fruit Mix.

In Sweden, they also come in a salty black liquorice flavour as Salmiak or ‘black herring’ Fish are beloved in Sweden.

They don’t look very appetising and that might be the reason why they didn’t sell very well in the USA.

Here at The Kandy King, you can sign up for a wholesale account quickly and easily meaning you can bulk buy wholesale sweets in the UK online today!